To edit, simply click directly on the text and add your own words.

​Each year the Shavano Conservation District generates an Annual Report of the events and activities of the previous year.  The 2021 Annual Report can be viewed here.

OUR BEGINNINGS WERE HUMBLE 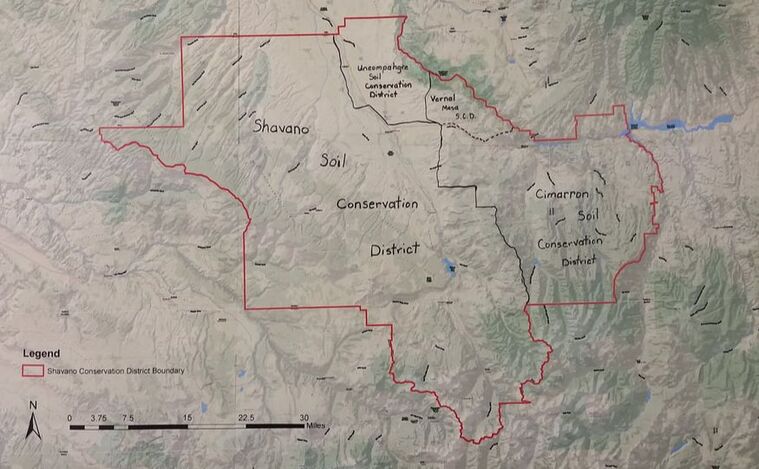 ​In the late 1930s and early 1940s, floods were more nearly the rule than the exception in the Shavano Valley of eastern Montrose County. While some caused minimal damage, others resulted in thousands of dollars in loss to crops, livestock, irrigation systems, roads and bridges, equipment and farm structures. The residents of the valley tried on-farm diversions, dikes, and floodways with some success but could not control major flows. So, neighbors locked arms to create the Shavano Soil Conservation District with hopes that flood control works could ultimately be put into place.

Actually, the Shavano SCD was not the first District formed in Montrose County. On a high bench east of the town of Montrose was a successful potato growing industry. An old lake had been drained but the land had never dried sufficiently to permit cultivation. Hungrily, farmers eyed this potential cropland and, in 1940, formed the Vernal Mesa Soil Conservation District. The express purpose of the District was to obtain assistance in digging drain canals to dry the lake bottom. Once completed, this act successfully eliminated a cattail wetland. With this project behind them, interest waned and resulted in the eventual demise of the Vernal Mesa SCD.

Others in Montrose County were awakening to the opportunities and recognizing the benefits that could accrue through soil conservation. February 25, 1942 marks the enthusiastic passage of the referendum creating the Uncompahgre Soil Conservation District. It was small initially with just 5,500 acres and was represented by 55 landowners. The land was squeezed between the Uncompahgre River and the Black Canyon of the Gunnison River in northern Montrose County. In fact, a tiny bit of Delta County was included. Soils here were heavy, full of clay and salt, erosive and a definite conservation challenge.

Ranchers in the higher and rougher sections of the area noted all of the conservation activity in the valleys and decided they could use some of the action too. May 12, 1948 was the date the Cimarron Soil Conservation District was approved. It was a piece-meal affair; some folks wished to be excluded, but the remaining 100 represented the better part of a 248,000 acre land area. It included lands originally in the defunct Vernal Mesa District and extended east across ranchlands to the Lake Fork of the Gunnison River.

The Shavano, Uncompahgre and Cimarron Districts flourished and lands were petitioned into each. To the advantage of land users, the three Districts combined forces to create an equipment pool. Tractors, dozers, scrapers, land planes, disks and rippers were obtained for land leveling, dam building, brush clearing and other improvement measures. The pool retained equipment operators. A lot of coordination was necessary and, always thinking, the supervisors believed that a single district would function more efficiently. A special election was held and the three districts became one in 1964. The name Shavano was chosen for the combined District which totaled more than one million acres. Incidentally, the name Shavano was that of Ute Chief Ouray’s war chief. Because Chief Ouray was a very peaceful Indian, Shavano likely had a lot of time on his hands.

Shavano Conservation District (SCD) and the Natural Resources Conservation Service (NRCS) want feedback from local landowners on local conservation and natural resource concerns.  The feedback on the identified concerns will be used by the NRCS when developing the Farm Bill Conservation Programs in fiscal year 2020-2021.  Your Local Work Group (LWG) meeting was held on March 14, 2020, in conjunction with the Annual Meeting and Banquet.  During the Local Work Group Meeting local landowners determined the top two highest priorities within our district, as well as the “what” and “why” of each concern, and “how” each concern might be addressed in order to achieve a successful outcome.  The top 2 concerns and priorities were then be sent on to the NRCS State Technical Committee (STC) in order to establish statewide priorities for 2021.
Participants in an LWG can be agricultural producers, owners of private agricultural lands, including nonindustrial private forest land, representatives of agricultural organizations, environmental organizations, and governmental agencies carrying out environmental, agricultural, or natural resource conservation programs and activities.